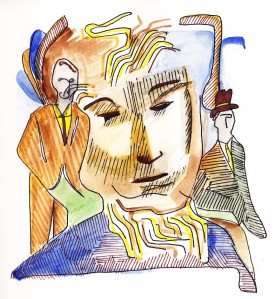 Although he insists that the book was mere scrap from which to build the movie, Grahme Green gave us a unique version of the story when he published The Third Man.  How can a reader help but compare, contrast and wonder what might have been?

For the most part the movie follows it’s predecessor but it varies in a couple striking ways the chief being the narrative style.  The book is in third person, a tale told and interpreted by the policeman.  Dexter, the protagonist, seems distant and a bit quirky under the steady eye of the officer.  In the movie we are given the separate characters of the policeman and Dexter, further separated by their distinct nationalities.

These change the mood of the very same story.  Less distance between the audience and the main character and more distance between the main character and the law in the movie results in a much more haunting tale.  Imagine the tale of Oedipus manipulated in this way.  What if, as in the book The Third Man, we had an aloof narrator?  What if Athena were telling us of the tragic tale of the semi-divine Oedipus?  Her warmth and wit may cause us to care a bit less about the fated man and more about her.  We may begin to trust that she truly understands him and for her part will be kind.

Such trust in our narrator sets us at ease and the evil loses some of its sting.  Consider also the friend who tells you about his camping misadventures.  You may laugh at the story about how he was trailed by a bear because he sits safely in front of you.  In order to be truly frightened you must be in absolute suspense, and your friend ironically proves the outcome.  If on the other hand your friend tells you about a man he met while camping and his adventure with a bear, you don’t know the outcome.  You will be gripped no doubt, but on the other hand you don’t necessarily have any emotional attachment to the character in his tale.  If then you seem to remove the narrator by watching the story as a movie all of your affections identify with the man of the story himself.  Your fear will increase because you have more fully entered the story.  This fear will increase in as much as you are able to identify with the man.

The movie The Third Man is gripping and dark, an unsettling tale about a normal man who finds himself sucked unwittingly into a heartless crew of criminals.  The book The Third Man is well written, and although gripping, is full of enough clever turns of phrase and events to keep you from feeling the noir quite so sharply.