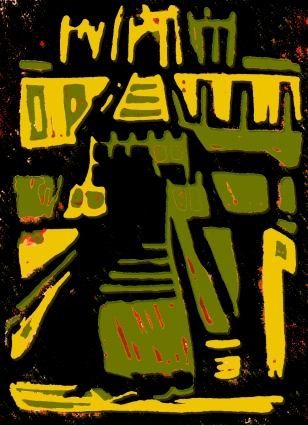 Jacob’s vision of a ladder to heaven has been interpreted as a dream showing some people climbing their way to heaven while others tumble down.  However, the angels or messengers in the dream seem to be coming to and from God to Jacob (Israel).  This is more likely a vision of communication between God and His people.  Such communication was lost in “the Fall” – when Adam and Eve were kicked out of the garden of Eden.

In Jacob’s dream God promised Israel a homeland and the prosperity of his “seed.”  How can we help but remember the prophecy of Genesis 3:15 as God cursed the serpent, “And I will put enmity between thee and the woman, and between thy seed and her seed; it shall bruise thy head, and thou shalt bruise his heel.”  This promise that a “seed” will be victorious over the serpent that tricked Adam and Eve into losing fellowship with God is the continual theme of the Genesis narrative.  In Jacob’s dream God continues this promise with a vision of communication between God and man, exactly what was lost in the Fall, and hope of many good nations who will start in the place where God has revealed himself and will go out into all the world just as God had commanded Adam to do in the beginning. (Genesis 1:28)

It is ironic then that when Jacob’s seed did indeed inherit this land Beth-el became a place associated with the worship of false gods.  The prophet Amos later rebuked the Israelites for mocking their true God by ignoring His offer of close communication in true worship.  Yet he also promised that salvation would one day come.  This salvation is made explicit in the book of Hebrews when the author proclaims that although God used to communicate through prophets He has most recently sent Jesus Christ who after his work of reconciliation between God and man, “sat down on the right hand of the Majesty on high; being made so much better than the angels.”  (Hebrews 1:3-4) He is the final messenger who descended the ladder, was crucified for our sins, resurrected from the dead, ascended into heaven and sits at the right hand of God the Father.  Christ is our gateway to God.  He indeed called himself just that when he said he was the door.